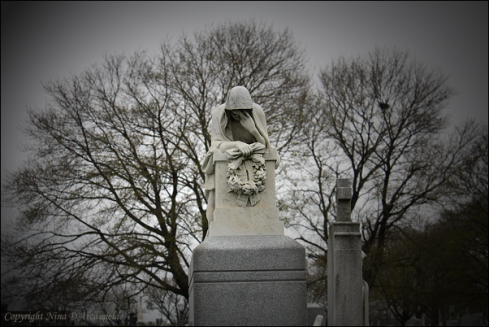 Look at them. They stand there, dullards staring upward, not an original thought in their skulls. They’re sheep, cattle, suckling piglets awaiting the slaughter. They’ve grown soft, ineffectual, flaccid – just as he did. Can you imagine allowing yourself to be dragged naked through the streets, strung upon wooden posts, stabbed without uttering a single plea? No wonder those who follow do so with vacant stare and limp aptitude. It sickens me to look upon them, reminds me of my own crushing disappointment – the mother of one so weak willed. Yet they erect this edifice, this monument to a girl named Mary and pray before her shroud covered head. That girl is long gone of this earth, as is her passive nature. Millennia now I have endured his shame, but no more. I shall quake the very ground they stand upon as they cry out to me, beg that I beseech my child forgive them.  My child died, do they not remember? They are the ilk that killed him long before he was crucified.

Nina D’Arcangela is a quirky horror writer who likes to spin soul rending snippets of despair. She reads anything from splatter matter to dark matter. She's an UrbEx adventurer who suffers from unquenchable wanderlust. She loves to photograph abandoned places, bits of decay and old graveyards. Nina is co-owner of Sirens Call Publications, co-founder of the horror writer's group 'Pen of the Damned', and if that isn't enough, put a check mark in the box next to owner and resident nut-job of Dark Angel Photography. END_OF_DOCUMENT_TOKEN_TO_BE_REPLACED
This entry was posted on Friday, June 8th, 2018 at 9:03 am and tagged with A Mother's lament, anger, angst, flash fiction, fury, Nina D, Nina D'Arcangela, pain, religion and posted in Dark Fiction, Flash, Flash Fiction, Horror, pain, twisted, Writing. You can follow any responses to this entry through the RSS 2.0 feed.
« Eight Minutes of… A New Year’s Eve Tale @Sotet_Angyal #horror #flash #fiction