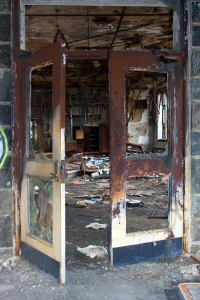 How many of you would even know it was there?…

Every day, so many of us drive past a world that’s been forgotten; pushed to the side, not by land movers and bulldozers, but by a conscious will that wishes not to acknowledge what humanity is genuinely capable of.  So few ever take the time to notice what is around us.  Who lived there; what was that place; what happened inside those walls; what might still be happening in there now? Yes – now, at this very moment while we blissfully drive past listening to our iPod that’s been jacked into the satellite tracked, bluetooth enabled, DVD playing entertainment system in our overly priced vehicles, living in complete ignorance of the horrors that might have happened not 50 feet from where we’re sitting at any given moment?

Some of us take the time to stop and wonder, or wander up and have a look. Some see it through their naked eye as a blight by the roadside that will eventually be sold to a land developer and turned into condominiums – god forbid we leave one piece of history untouched, unpalatable as it may be.  Some see it as a mark of shame that in a less enlightened time, was considered the norm and was hushed up for the overall good.  While others of us look upon the remains of what was considered common place in a civilized environment with utter shock and dismay wondering how this could have ever been considered acceptable.

Being an UrbEx photographer, I have the rare and unique privileged to be among the few to not only see, but seek out such places.  Homes for the socially unacceptable; places where those who could not or would not be homogenized into the dictates of ‘modern day’ society were entombed; or places that no longer serve a purpose in our fast passed, disposable, gimme-gimie world.

This particular photo is from an ‘Institute for the Feeble Minded and Epileptic’.  The facility operated from the early 1900’s to the mid 1990’s when it was eventually shut down.  Whether due to a new overriding moral conscious or budgetary cuts, I do not yet know, but what I do know is that it is certainly a dark stain on the cloth of human compassion. While wandering through this marvelously preserved facility, one can’t help but wonder what kind of life those that were sent here were able to live.  The abandoned and overgrown playgrounds stands in stark contrast to the number of handicapped access ramps and signs of normalcy that could never be attained.  A child’s rocking horse (or lion in actuality) sits alone in a partially enclosed grass courtyard on a rusted spring – it’s once vibrant and alluring pink now faded to a dusty rose; the absence of debris surrounding it a sign that someone still pays attention.  What did the child who could only peer out the window at this playground toy feel? Did they ever see another child play on it, or was it put there by an architect to alleviate adult guilt and add a sense of normalcy to what was very obviously not a normal environment for a disadvantaged child to grow up in?   When one walks down these paths, it’s impossible not to feel the sorrow buried deep in the  bones of the buildings and the soil; a sorrow so overwhelming that it is near impossible to draw a full breath in some places.  This is a place that the undesirable were sent to live out their years; this is a place where bad things happened; this is a place that remembers its past, even if we choose not to.

Most of us would prefer to see places like this disappear; to hide the shame of what was once considered the humane way to deal with an unfortunate loved one.  I believe we owe a debt to those that were shunned and ill treated, locked away to hide the disgrace  of a child not perfectly formed; and if that disgrace chooses to grab a hold of us in a smothering grip and blight our perfect society – so be it. But do not look away; do not choose to ignore what was; do not think that you or I are any better than those who allowed these acts of egregious injustice to happen  just because we turn up the volume on the radio and glance away when caught at a red light near such a place.

In all fairness, the township in which this Institute is located has made a portion of the 200+ acre facility into a park and allowed nature to take it’s course.  I’ve not mentioned the name of the institute or its location as I would not wish to encourage the inexperienced to visit such a place unaware of the dangers involved.

This cemetery of graves marked only by numbers is hidden in the woods 2 miles from the complex that once housed these beautiful souls who were born different from ‘the normal’ child. If you take nothing away from this post; at least understand that even when this was considered a societal norm, the shame of hiding what was happening is evident in this chilling lonely patch of woods so far from where they experience their bleak existence.

Cemetery of unnamed graves hidden 2 miles into the woods.

Nina D’Arcangela is a quirky horror writer who likes to spin soul rending snippets of despair. She reads anything from splatter matter to dark matter. She's an UrbEx adventurer who suffers from unquenchable wanderlust. She loves to photograph abandoned places, bits of decay and old graveyards. Nina is co-owner of Sirens Call Publications, co-founder of the horror writer's group 'Pen of the Damned', and if that isn't enough, put a check mark in the box next to owner and resident nut-job of Dark Angel Photography. END_OF_DOCUMENT_TOKEN_TO_BE_REPLACED
This entry was posted on Wednesday, January 4th, 2012 at 10:54 am and posted in darkness, pain. You can follow any responses to this entry through the RSS 2.0 feed.
Deep Dark Seething Anger »