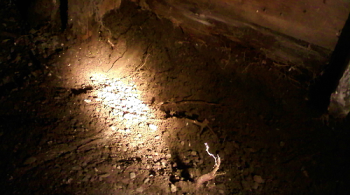 Plunging, scooping, the sound of dirt sliding off each shovel with a shoosh as its tossed to the side. Another plunge, another scoop, more shoosh – the pile grows larger, the hole surrounding their boots grows deeper, the men grow more weary. The scent of dry dirt giving way to the earthier aroma of moist, dark soil.

Removing his cap and scratching his head, he asks, “‘Ere, guv, don’t you think this looks more than a bit odd?”

The other spits, digs, then replies, “Blood well is, son.”

Digging deeper, the dirt turning firmer, becoming more dense. Each shovel still plunging, a foot braced on the back lending force to the spade as it slides into hardened ground. Loose dirt scooped upon the belly of the trowel tossed above, to the side with a shoosh as it slips off the metal edge – the hole growing with each effort.

Removing his cap and wiping sweat from his brow, he says “Take a butcher’s. Tell me that ain’t too wide.”

The other spits, digs, then replies, “Blood well is, son.”

Tree roots tangle and snag, yet dig further they are told, so they do. No longer plunging, only scraping a hardened surface painted putrid with residue – ground now removed, the scent is strong, almost fetid, a pungent odor.

Removing his cap and squinting in the dim light, he says, “Weird innit? Strange that there ain’t nothin’ but wooden planks, eh, guv?”

The other spits, swings, then replies, “Blood well is, son.”

Hefting the crimson coated shovel over his shoulder, he glances at the body lying near his feet, takes in the breadth of the pit they’ve dug, then turns to the man standing above.

One pistol shot fired. “No, I believe not.”

This piece of flash fiction was featured in The Sirens Call eZine, issue 05. Given one photograph, both Kalla and I wrote a 300 word flash piece inspired by that image alone. Thanks to my warm blankie for the spit shine!

Nina D’Arcangela is a quirky horror writer who likes to spin soul rending snippets of despair. She reads anything from splatter matter to dark matter. She's an UrbEx adventurer who suffers from unquenchable wanderlust. She loves to photograph abandoned places, bits of decay and old grave yards. Nina is a co-owner of Sirens Call Publications, a co-founder of the horror writer's group 'Pen of the Damned', and if that isn't enough, put a check mark in the box next to owner and resident nut-job of Dark Angel Photography. END_OF_DOCUMENT_TOKEN_TO_BE_REPLACED
This entry was posted on Monday, November 12th, 2012 at 10:19 am and tagged with Dark, Dirt, eZine, flash fiction, Light, Plunging, shot, The Sirens Call and posted in darkness, Flash, Flash Fiction, Sirens Call Publications, The Sirens Call eZine. You can follow any responses to this entry through the RSS 2.0 feed.
« Coffin Hop 2012 Goodies!
An Offer »