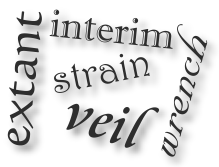 Like the maelstrom that swept in her tide, she swirled with a tempest of fate. Those before her attempted to flee; begged forgiveness for their evils. Misunderstood lives, unappreciated deeds, this lot unaware the veil had thinned solely to allow their pardon. Gleaming ebony skin that smoldered of embers left to flame, she bore down upon them with brutality unknown to these worthy heathens. Necks twisted most unnatural, bodies rent of their companion cog and spokes, these children of misdirection now granted reward for actions unprovoked yet savored by that which waits. As claws struck and teeth ripped, screams wailed the song of souls unburdened. Mother to the immoral, sister of the dishonest, beacon for the misguided, she stilled as the slop of her task struck a final note. More would come, born of those who kneel in perverse fealty. In the interim, the void of silence stirred her home.

Visit Pen of the Damned to see what the others members crafted with the same set of words. 😉

Nina D’Arcangela is a quirky horror writer who likes to spin soul rending snippets of despair. She reads anything from splatter matter to dark matter. She's an UrbEx adventurer who suffers from unquenchable wanderlust. She loves to photograph abandoned places, bits of decay and old grave yards. Nina is a co-owner of Sirens Call Publications, a co-founder of the horror writer's group 'Pen of the Damned', founder and administrator of the Ladies of Horror Picture-prompt Monthly Writing Challenge, and if that isn't enough, put a check mark in the box next to owner and resident nut-job of Dark Angel Photography. END_OF_DOCUMENT_TOKEN_TO_BE_REPLACED
This entry was posted on Monday, May 16th, 2016 at 12:18 pm and tagged with flash fiction, horror, interim, Nina D, Nina D'Arcangela, Pen of the Damned, Revelation, veil, word prompt and posted in Dark Fiction, Flash Fiction, Horror, Pen of the Damned. You can follow any responses to this entry through the RSS 2.0 feed.
« Bloody Valentine – Bad Love re-boot!
Good Grace »