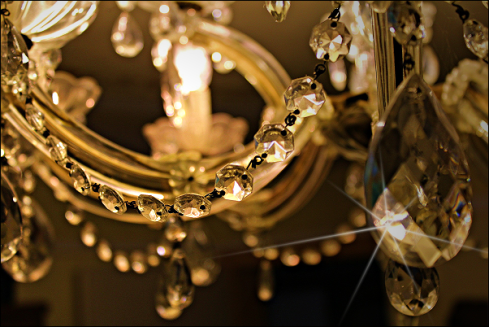 Eight minutes of, the gala was in full swing. Women adorned in their finest gowns, men in their spats and tails. All twirled the dance floor with inebriated glee.
Seven minutes of, the lights dimmed, the glass baubles above took on an amber glow as heads lifted in wonder and delight.
Six minutes of, the largest crystal began to gleam, none could draw their eye from it; they froze entranced.
Five minutes of, the bloom grew blinding: the skin around each reveler’s eyes began to darken and crack; to ooze brown rivulets as they gazed beyond the light. Slack of jaw, their lips began to curl exposing desiccated gums. Teeth clattered to the floor as sockets shrunk and tongues retreated to withered husks.
Four minutes of, the first horn emerged from the starburst, followed languidly by the enormous beast – it struck the marble with a resounding crack as it landed upon cloven hooves and bent claw.
Three minutes of, the aberration stalked among the paralytic ensemble. The men it had no use for – it sought only breeders.  It sniffed, it tasted; it rent the unworthy to pieces. Gold and silver damask rippled through the air as it discarded one female after another.
Two minutes of, it chose a single sheep, a prize in grand finery festooned with shimmering gems.
One minute of, the creature stepped back through the starburst having seeded its offspring. The assembly of revelers fell to the polished slab; their flesh dusted the air upon impact, what clothes remained lay poised in eternal waltz.
At the stroke of midnight, the brilliant glimmer of the seven pointed star diminished to the chandelier’s soothing glow as a single scream ushered in the new year.

Nina D’Arcangela is a quirky horror writer who likes to spin soul rending snippets of despair. She reads anything from splatter matter to dark matter. She's an UrbEx adventurer who suffers from unquenchable wanderlust. She loves to photograph abandoned places, bits of decay and old grave yards. Nina is a co-owner of Sirens Call Publications, a co-founder of the horror writer's group 'Pen of the Damned', and if that isn't enough, put a check mark in the box next to owner and resident nut-job of Dark Angel Photography. END_OF_DOCUMENT_TOKEN_TO_BE_REPLACED
This entry was posted on Wednesday, January 3rd, 2018 at 4:02 pm and tagged with beast, flash, flash fiction, Happy New Year, horror, New Year's Eve, Nina D, Nina D'Arcangela, Pen of the Damned, prose and posted in Dark Fiction, darkness, Flash, Flash Fiction, Horror, Writing. You can follow any responses to this entry through the RSS 2.0 feed.
« A Foul Day!
A Mother’s Lament, Nina D’Arcangela #flash #fiction by @Sotet_Angel #pain #anger #angst #POTD »